The new Daegu Dalseong Citizen’s Gymnasium has been conceived as a simple and compact volume which is perfectly integrated in its immediate urban surroundings. The two main goals of the proposal are, on the one hand, to define public space linked with the surroundings, and on the other, to establish architecture, expressed in pure and essential language. The first goal is to give different characters to each side of the Gymnasium considering orientation, general climate conditions and levels. The second goal is to design and bring continuity to all the elements, with few gestures only.

Public space and Program
There are 3 different access situated on 2 different level; Spectators, Athletes and Users.Spectators and Users access from the Plaza on the East side, +0.0m (+32.0m SL), while Athletes access from the public parking on the West side, -5.0m (+27.0m SL). The Plaza on the East side is not only a wide open public space but it is where connect Daegu Dalseong Citizen’s Gymnasium, Dalseong Sports Complex Park and Hyeonpung-myeon, in which will occur various activities such as Climbing Wall, or ordinary plaza activity. The Amphitheatre on the South side is a part of the Gymnasium, due to the extended activity from the Daily sports facility, but also a part of public space. The public parking on the West side is for every vehicle user, including handicapped people. Athletes or performer approach from this way to the controlled dressing room or waiting room These 3 different sided programs have been planned mainly by orientation. Daily sports facility locates on the South side to take advantage of natural sun light during day time. On the other hand, direct exterior opening to the Gymnasium is on the North side due to the indirect sun light and the view toward the mountain behind Dalseong Sports Complex Park. Two main entrances, as consequences of diverse site levels, are clearly marked with highly opened concrete portals, will lead people to the orientated area. The lounge is a wide open space directly connected with the multipurpose gymnasium, which also serves as a cafeteria in terms of an inner space for local communities. Beginning from the lounge, all the membership club functions continues until the bottom level, -5.0m (+27.0m SL), to the parking level, occupying all the South parts of the building. Two Daily sports facilities are located separately into two levels, stacking with extra open space. The first Daily sports facility on the ground level can possibly extend to the loggia, and the second Daily sports facility on the underground level to the Amphitheater at its front.

Structure
The clear structure is organized by multifunctional roof, supported by concrete columns and concrete walls which also constitute the main structure of the building. The roof structure, which is perceived as a principal element of all, since to provide wide open space without any vertical structure is a priority goal of the project, derived all the visible geometries on the façade and the floor, which even contain various complex functions. It has a module of 4.4m x 4.8m x2m, tilted girders with the triangular truss, which defines the whole proportion of multipurpose gymnasium. This truss structure is cladded with yellow brass sheet and there are two different patterns; one is closed triangular pyramid, while the other is opened to the top. Half of the rows, by the Pattern, serve as the space for artificial lighting and mechanical ducts, providing heating, ventilation and climate, and the other Half are used in natural lighting and ventilation with skylight. While another part of Pattern completes geometrical complexity from inside. Photovoltaic installations on the roof upper side of the ducts, approximately 700m2, are tilted 10°degrees towards to South. This roof structure itself is an architectural response to flexibility of our time.

Façade
Façade is another expression of pure geometry of the project, realized by light yellow tinted concrete. Geometry on the façade has two principal functions, on one hand, tectonic purpose for the materiality of concrete, on the other hand visual purpose to counterbalance its volume into recognizable one. It is also reminder of the inner structure and brings internal continuity to exterior. 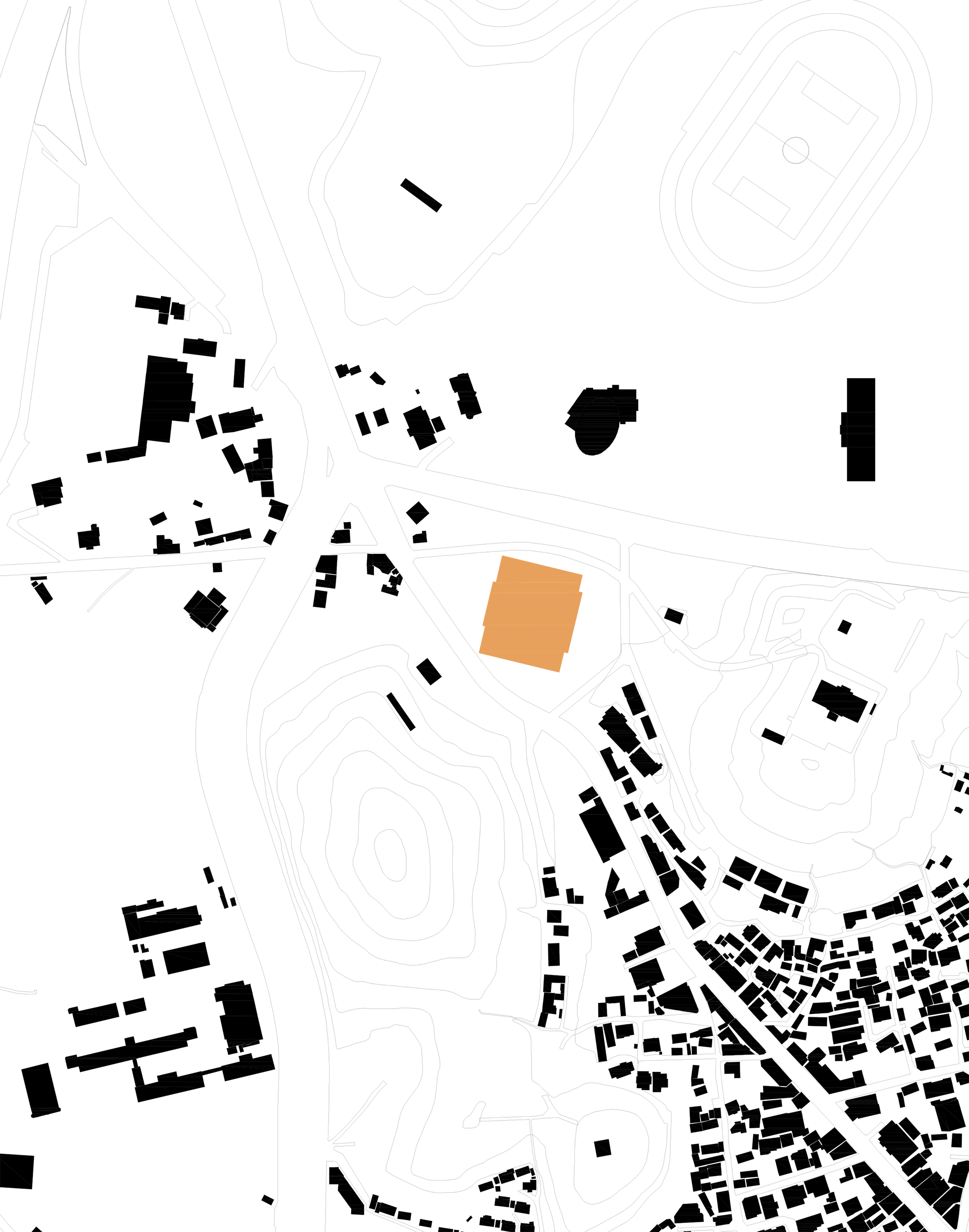 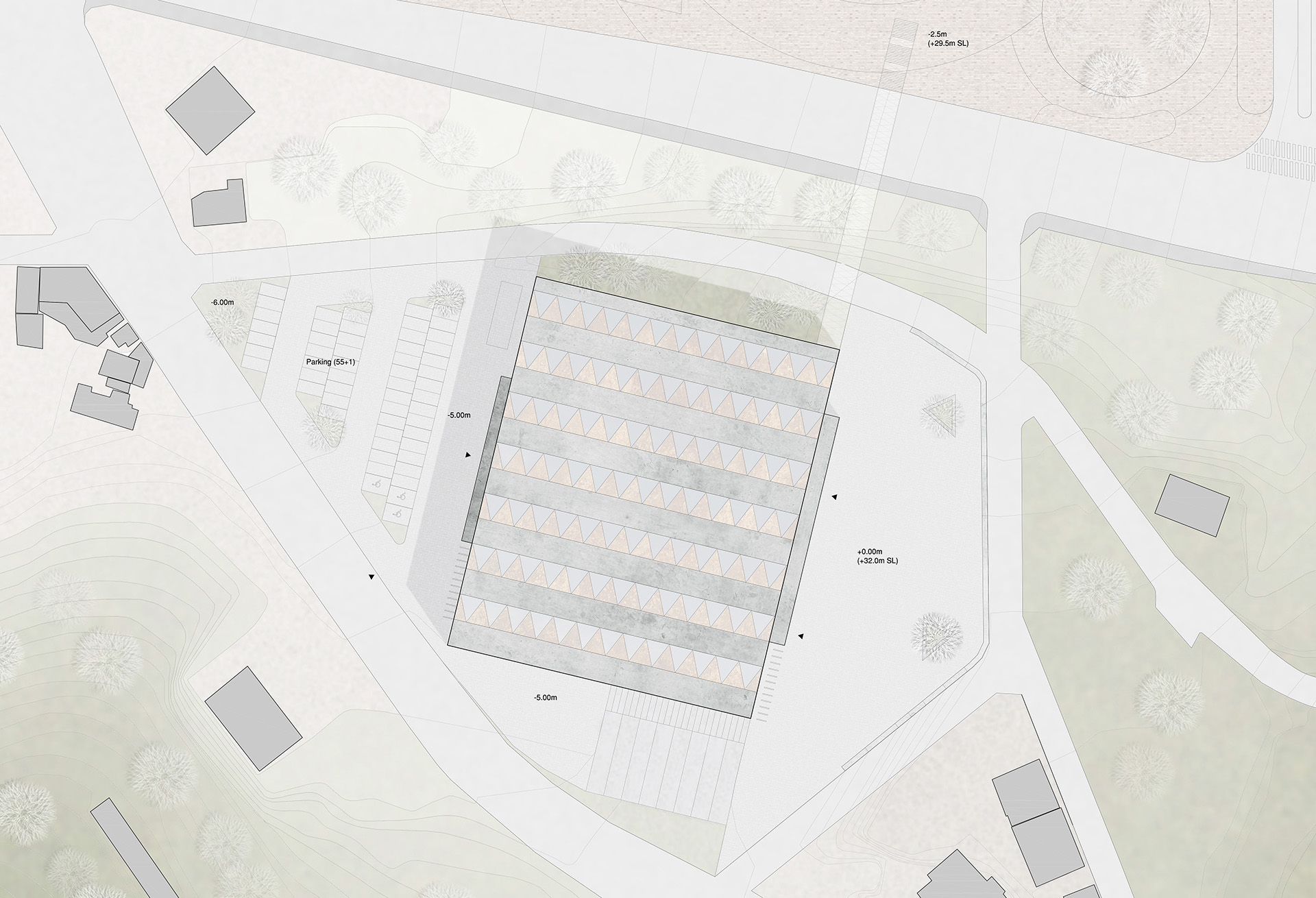 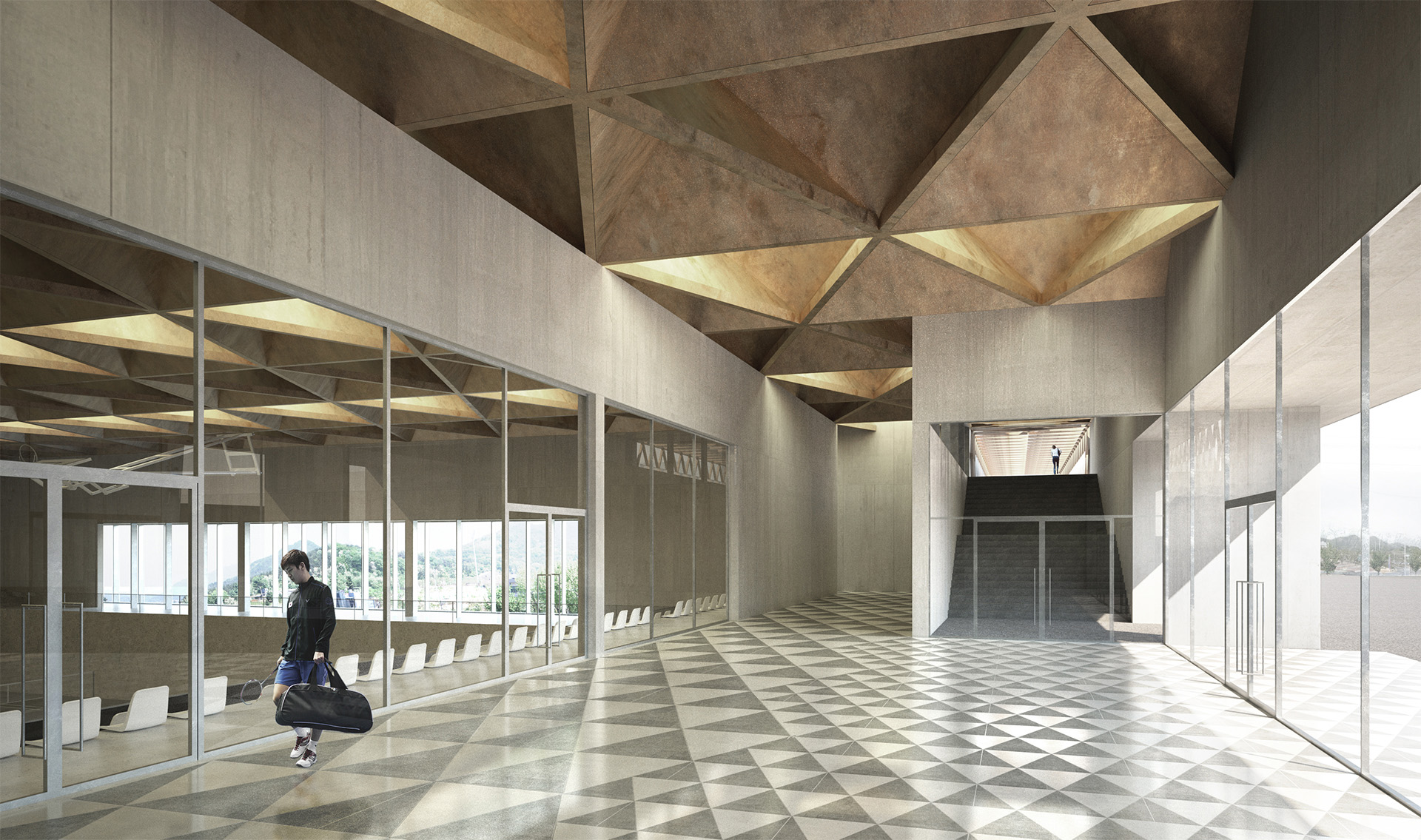 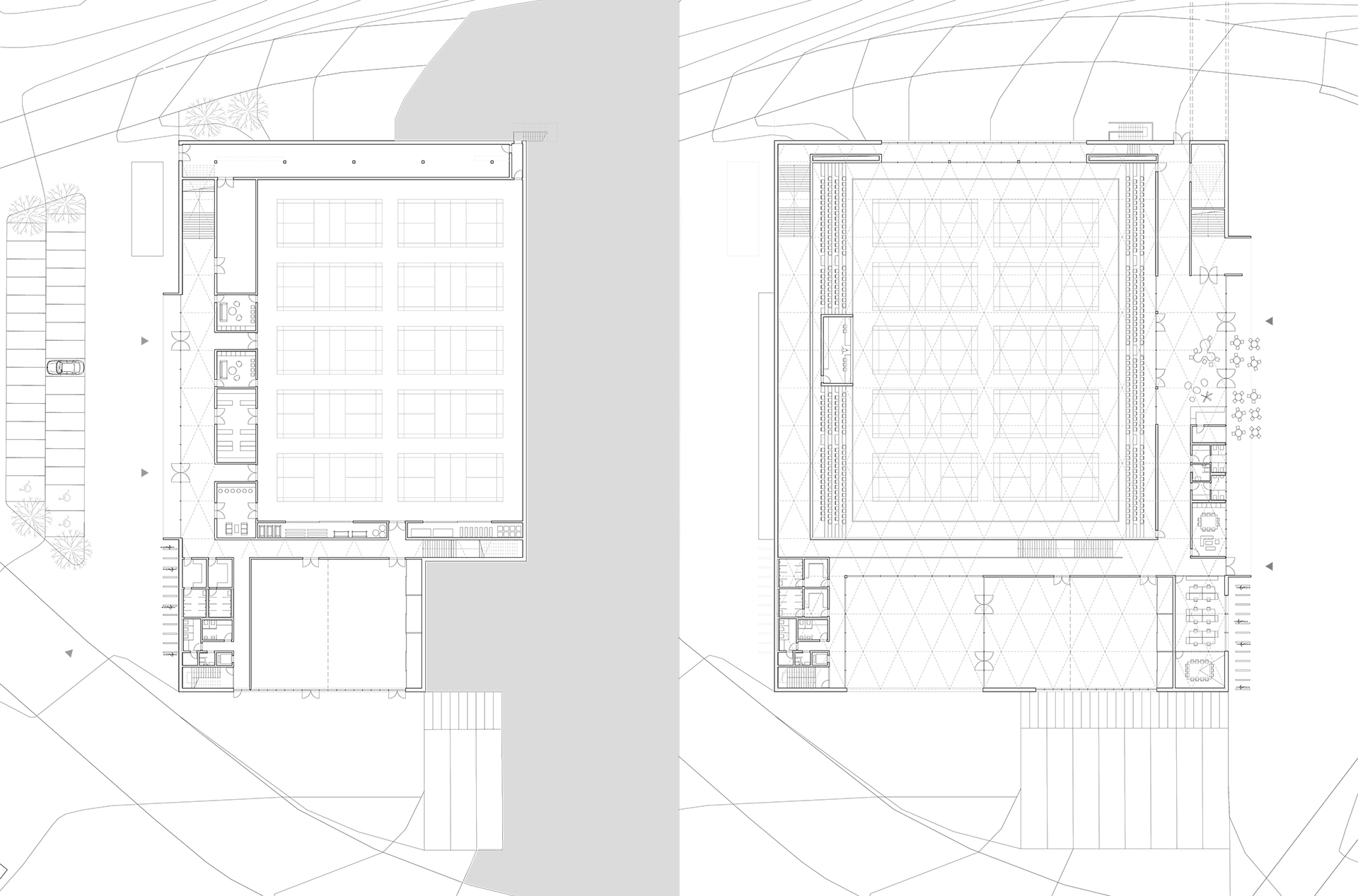 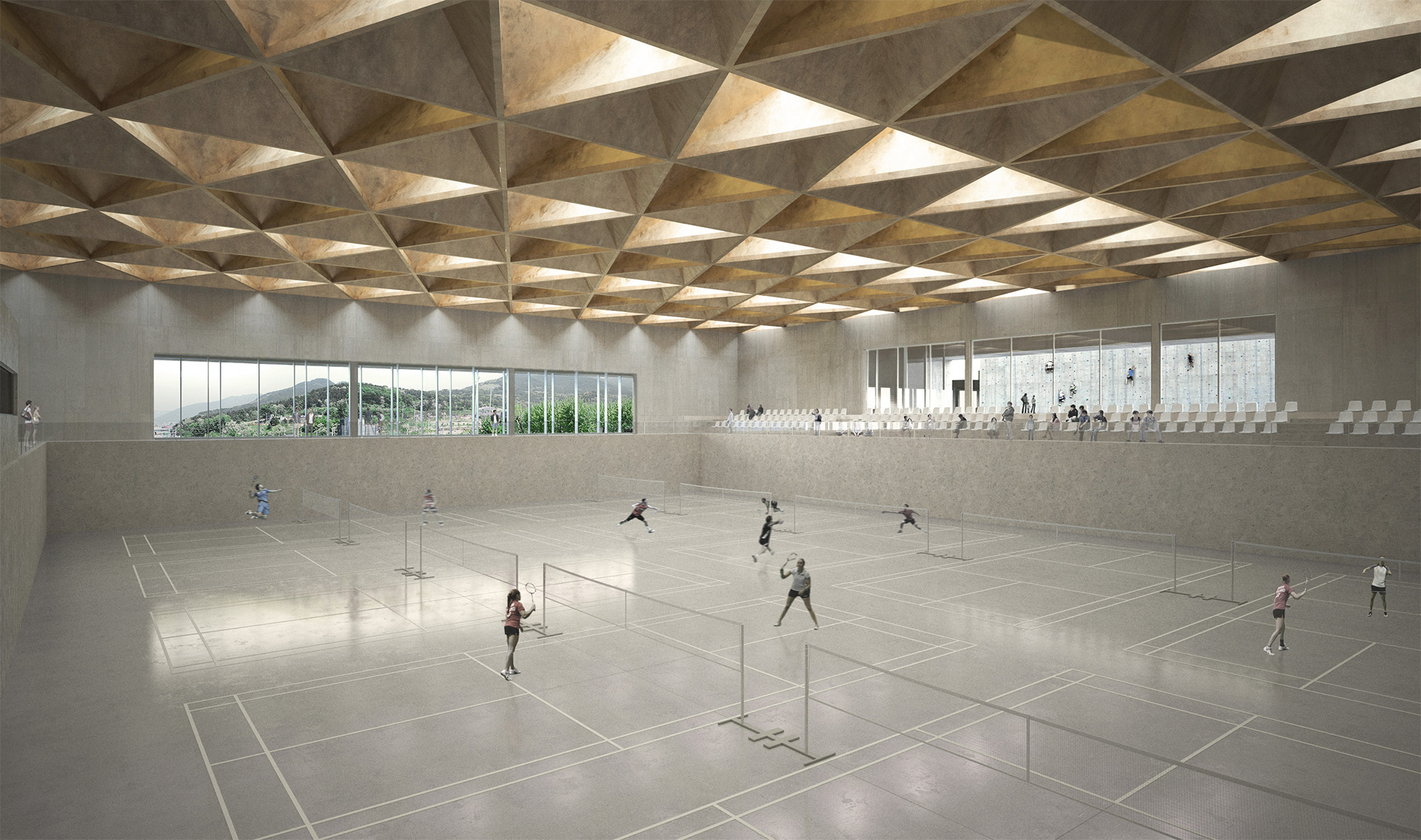 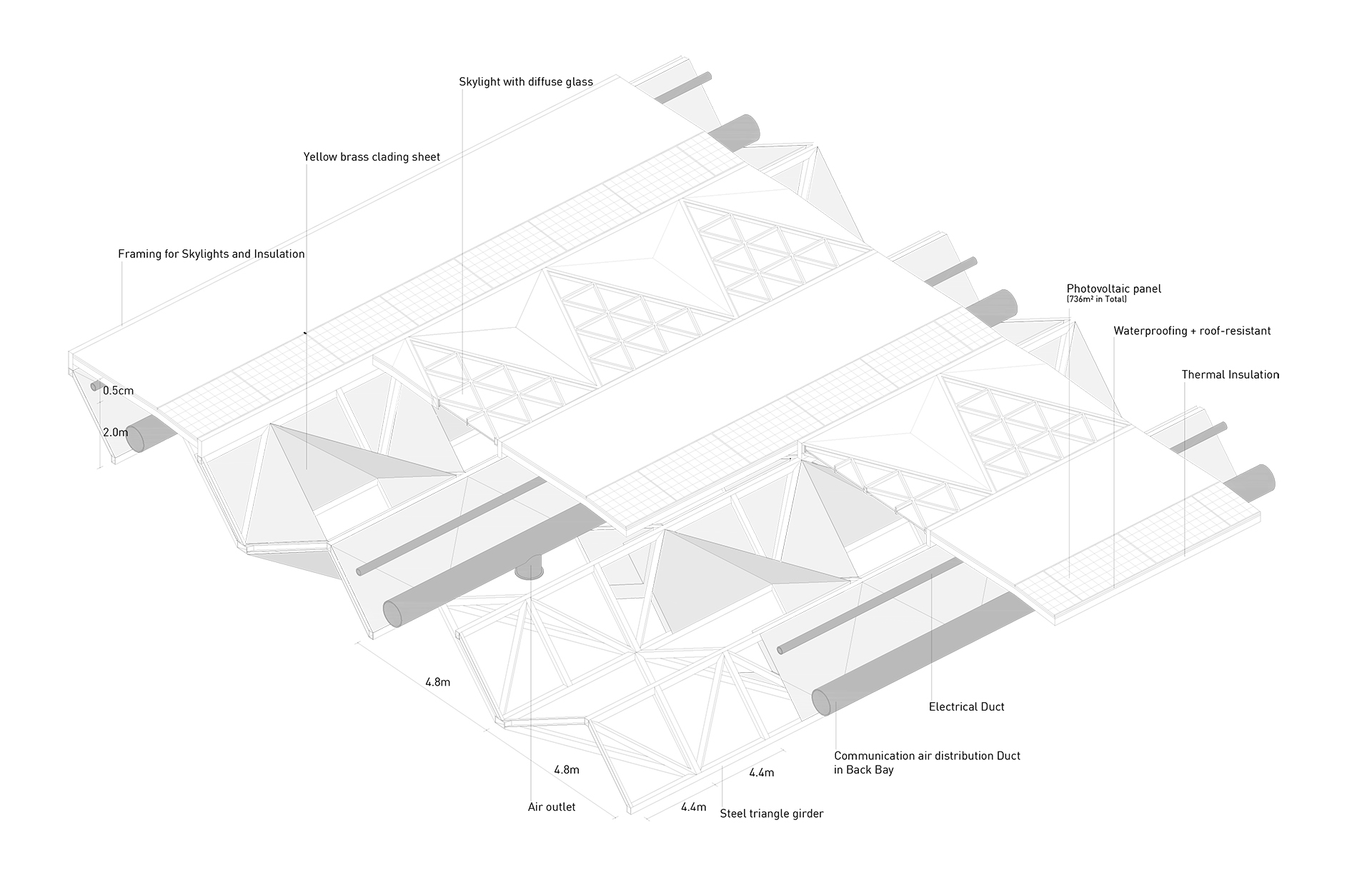